Tension and Revision: Experimenting with Sound

Several days after Michael Torres visited Big Walnut, students approached me to ask if it was true: Did a man play his saxophone, making it sound like a blender? Yes, he did, and he also imitated or rendered his own interpretation of a door locking, a clock chiming, a door squeaking. Т In our school, as within most, news travels fast, but typically that news doesn’t involve creative writing and even more creative approaches to getting into that writing. 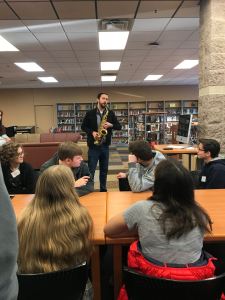 It’s the getting into the writing that remains the greatest hurdle for so many of my students. And when students struggle to get into the writing, they want to keep the first bit that sticks toТ the page. Revision seems out of the question when they strained to write anything at all. Through the Pages Program and our work with Michael Torres, we revised through playing with found sounds which pushed us to tune our earsТ into the possibilities of a story as it unfolded. As Michael said, within sounds are ideas. We set out to find the sounds that tell our stories.

Over a snowy weekend, students collected sounds from their daily lives—sounds that most overlooked or no longer heard because they didn’t slow down long enough to listen. I assigned all students the task of bringing in three found sounds by recording them on their phones. Again, I asked that the sounds were present in their lives already rather than created sounds. Sounds ranged from a younger brother yelling out about a video game; a dog’s nails scrambling across a hardwood floor; the ding of the timer on a microwave; a hairdryer muffled by a closed door. The sounds themselves were rich and layered. Often students concentrated on recording one sound, and then discovered many more spontaneously captured in the background of the same recording.

As a class, we listened to the sounds of student volunteers. We formed associations for the various sounds and shared them with each other. Our stories began from there. A chiming clock made us question the time of day; would it matter if this was in the AM or the PM? What feelings do we have about a clock striking the hour? Who might be hearing the hours ring out? We put together as many combinations as possible, helping the student who originally recorded the sound to step outside of it as he or she knew it. We sought to find the link between what we know for certain and what we can imagine.

From there, we began to stitch together the sounds of four or five students in numerous patterns. We spoke about stacking sounds to make the story and the sounds full. How did the story change based on sequencing the sounds? What if we brainstormed about how a sound would feel to the touch? Within a class period, we orally built more stories as a community than we could ever complete on our own. We wrote and revised together, never settling on a single final version; without calling it the writing process, we moved through the process by playing with the sounds. We could interpret our own work, discuss the effective and ineffectiveness of certain pairings, and rework the piece in a matter of minutes. Based on how a conductor decided to weave together the sounds by pointing to the student with the recorded sound we wanted, we experimented with the timing and order of the sounds and how this introduced tension. A discussion about tension was a wholly unplanned for but teachable moment that arose during this activity.Т  Where could we create tension?

Playing with sounds moved students past writer’s block and led us to discovering the beginnings of stories. We conducted the sounds and built tension in establishing patterns; we let their impact rest with us, reworked the order, and began again. We thoroughly studied revision and saw the benefits of such labor without ever picking up a pen.