In my high school English classroom, we imagine ourselves AS IF we are the paparazzi[1] and news teams of Elsinore, Denmark who are determined to investigate the royals!Т  What is going on in the castle? Can you believe Gertrude married Claudius so soon after the death of King Hamlet? What’s up with Prince Hamlet?Т  Is Ophelia okay? 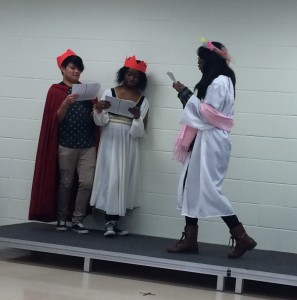 Students create their own news teams, complete with logos, catch lines and news anchors. Other students rehearse Ophelia’s mad scene.Т  When the scene is ready, the paparazzi invade Elsinore, hiding behind (imaginary) curtains and walls to spy on and snap photographs of the drama at the castle.Т  They then tweet their pictures and brief messages to their news teams who go to work putting together their broadcasts, hoping to beat out the competition with the first and best breaking news story to the loyal citizens of Denmark.

Fig. 2 – Live tweets and images from the paparazzi to the news team at the desk.

Using rehearsal room techniques as a doorway into the complex text of William Shakespeare, students meet the characters of Hamlet and enter into the intrigue of King Claudius’ court.

The Dramatic Inquiry[2] approach energizes students as they work together to understand the words, characters, and action of the story.Т  We meet the characters by trying out their own words to determine what they are saying, to ascertain their mood, to evaluate what their attitude towards others (or others towards them) might be given the situation.

Fig. 3 – KADESH paparazzi gives a shout out to the news teams’ terrific collaboration.

[2] In a program titled “Stand Up for Shakespeare, America!,” Ohio State University collaborated with the Royal Shakespeare Company of Stratford, England to bring teachers from Central Ohio together with theatre practitioners, actors, directors, voice coaches and more to apply rehearsal room techniques to unravel the mystery of Shakespeare’s words.