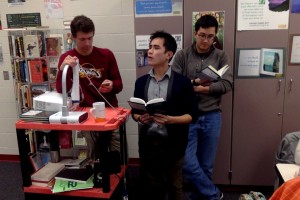 My AP Lit classes read Sandra Cisneros’s The House on Mango Street this last week, and some of them had a hard time connecting with the text. They couldn’t feel Cisneros’s rhythms or didn’t like the narrative style or couldn’t identify with Esperanza emotionally.

I was a bit surprised because Mango StreetТ is one of my favorite books for the fact that I think it speaks more easily to us than some of the more well-aged literature that we read (Frankenstein was our last text). But I knew we could get closer to Mango, we just needed the right activity. I then remembered an assignment in grad school when we had to pair a song with a section of text for the young adult novel we were reading. I remember my group’sТ song – Jimi Hendrix’s “Kiss the Sky”; and I remember the protagonist, a young girl, was swinging – she found freedom in the swinging, and the song spoke that. I can’t remember the title of the text, but that moment of it will never leave me.

So I asked my students if we could delay discussion a bit today to head in a more creative direction; they agreed. I then walked them through my thought process of finding a soundtrack song for the chapter “Bums in the Attic”. “The Weary Kind” by Ryan Bingham had the relaxed feel I wanted, but was too sad. “My Name is Jonas” by Weezer had the power and joy I think Esperanza feels when she dreams of having her own house, but is a little too heavy. So I read withТ “Sedona” by Houndmouth as my soundtrack; it has the joy but with a laid back feel – and I timed it so that I ended the chapter right as the chorus begins. Nice.

The students worked in groups of two to five and had about nine minutes to choose their selection from the text, find a fitting song, then practice their performance. When they performed, they did so in chronological order of the text so we could feel the emotions in the order Esperanza felt them.

“Losing My Religion” by R.E.M. for the chapter “Smart Cookie”

“The Funeral” by Band of Horses for the chapter “Born Bad”

One violinist happened to have her instrument with her, so her group used theТ 1st movement of Lalo’s Symphonie Espagnole for the chapter “Chanclas”. 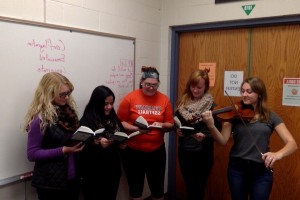 And after we were done, they said, “We should do this more often.” Yes, we should. We could feel the text in new ways once we heard how it sounded and felt to the others in the room. Our next class discussion on tone will have even greater depth as we develop this new lens of hearing literature with a soundtrack.