The Metamorphosis of a Poem: Validating Process

Often, it’s easy to see in any work of art the unattainable glow of perfection. It’s easy to believe the artist sat down and produced their masterpiece without breaking a sweat or weeping silently into a pool of red wine. We assume “real” writers never feel like failures and “successful” artists aren’t ever crippled with self doubt. We tell ourselves that the process should feel easy, natural, and that all true talent comes out dazzled the first timeТ or it never reveals itself at all.

As a poet, I’ve had to remind myself creativity is rarely like this. There’s a lot of frustration and downright agony involved. There are endless nights of feeling stuck and defeated. There areТ rejection letters and writer’s block and poor reviews. Yet, instead of discounting these moments as a waste, I’ve come toТ celebrate them. I’ve learned to wade in, steadilyТ push against my own fragility and keep going.

I believe this is whereТ weТ birth creativity and that it’s in the muck that we make meaning.

I’m not alone in my experience. Carol Dweck reminds us in her bestseller, Mindset, Т that perfection or success is rarely (if ever) achieved on the first go. Sometimes it is a lifetimes of trying before the going get us somewhere.Т Anne Lamott celebrates the “shitty,” unpolished drafts in her book on writing, Bird by Bird and Т Adrienne Rich recommends “diving into the wreck” and getting lost for awhile. To this end,Т I am constantly reminding my students that creativity and artistic production is neverТ perfect and that the process is just valuable as their finish product.Т I remind them thatТ frustration is powerful. Even beautiful.

It keeps usТ leaning in.

In my next post, I’ll outline how we can encourage (and even celebrate/showcase) more process-driven work in the classroom, especially as it relates to The Object Lesson. In the mean-time, below I’ve included a poem-map of one ofТ  my recent pieces. Basically, it’s just aТ life-cycle of the messy, vulnerable stages of my work, but moments I believe are worth sharing and even celebrating.

VersionТ 1–Birth: Initially, I hadТ several lines swimming around in my head. Some felt connected, others didn’t. I wasn’t critical with my first draft. I allowed myself to be generous, abundant, greedy with the language. I let myself run in circles until the core revealed itself. I forgot about censorship. I indulged. I believe inТ making fat first drafts.

The mice are scratching at my heart again.

They want a love poem I will not give them.

Maybe I’ll put it in a bottle and sending it out to sea for a lonely shark.

the long, timid body of our irregular love affair

and spread all ourТ  withered bones

across the sea to swim with all the lonely sharks.

and cave in the shape of mouth.

I’ll blend this into corkscrewТ  alphabet,

serve it to you in soup, watch you savor the taste of each dropped vowel.

Don’t worry, darling,Т  only humans have a need for things to shut.

A door, a mouth, a locket

Even the moths eat through a silk blouse.

It is possible to love the past and the past only.

This is nothing but tea leave in a cup.

Trapped in our star dust, withered bone and in a mouth-shaped cave.

VersionТ 2–Adolescence:Т Here I knew what I needed to say. I identified the heartbeat of the poem and turnedТ the rest loose. I spliced out the excess and studied what remained.

They want a love poem I will not give them.

Maybe I’ll put it in a bottle and sending it out to sea for a lonely shark.

the long, timid body of our irregular love affair

and spread all our Т withered bones

across the sea to swim with all the lonely sharks.

and cave in the shape of a mouth.

VersionТ 3–Adulthood: Here, it becameТ all about streamlining onceТ my directionТ was evident. I had myТ arrow notched in my bow, now I just had to set it to the wind. I trimmed, played with line breaks, adjusted punctuation, and added a title. I primped and pinchedТ a bit and deemed the poem”finished.” The original intention was to experimentТ with Instagram poems (given the measurement constraints of an iPhone camera, so here it is in its final version.) 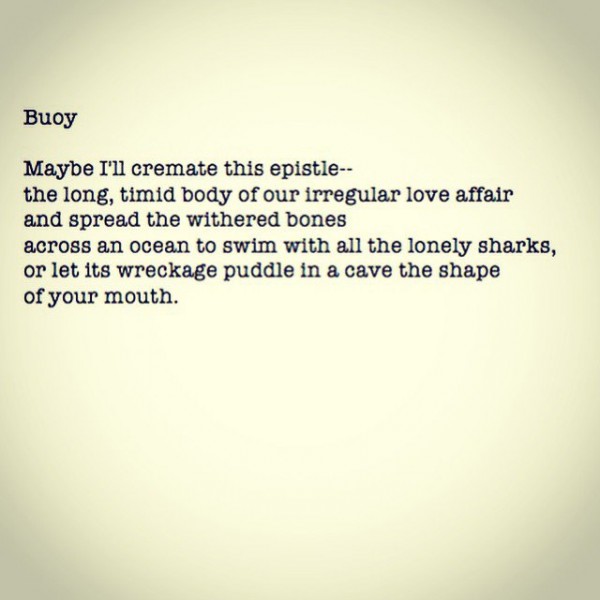