What do learning and freestyle rap have in common?

Yes, I am a lover of hip hop (mostly old school), and in working with and observing some of your students, I’ve come across quite a few of them who write their own rhymes, lyrics, and of course poems, and many of them also freestyle and/or “battle”. Freestyle or “battle” is common in hip hop circles where MCs “spit” (speak) lyrics back and forth off the top of their head. Freestyles are free form and are often improvised, never written down. That is one of the measures of true ability of the MC in hip hop culture, when an artist can speak from the top of their head with intention and clever lyrical agility. Freestyle and “battles” or “cyphers” have been happening in hip hop circles for over 40 years. Similarly, poets and spoken word artists also freestyle and “battle” of a certain sort, which we got a glimpse of in Louder than a Bomb. Poets however, as do MCs, often take it one step further and write their ideas down, carefully crafting their writing on the page. 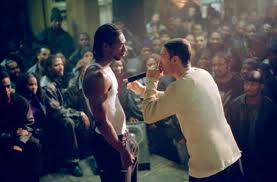 Below is an article in Scientific Reports highlighting a study of creative behaviors where scientists looked at the brain when in generates improvisational material. Different from the rote learning happening in many classrooms (not yours of course!) today, improvisation is a creative skill, an ability that is as important in the process of learning as it is in the application. This is why, though students grown, free-writing exercises are so important in sharpening students’ writing abilities. Improvisation is often associated with creative gestures and behaviors, but it is an applicable skill that can serve students beyond their formal educational years for college and job interviews, for correspondence of all forms, for interpersonal conversation and public speaking, and of course for dynamic and interesting writing.